Each year, Michigan barns and their owners have been recognized for their efforts in preserving icons of our state’s agricultural heritage. We are pleased to announce the five barns receiving the prestigious award this year. 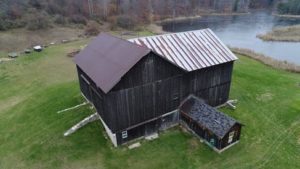 Concordia Hills is a 133-acre Centennial Farm located in Farwell, Michigan. The farm has been in the family since the original land grant was awarded in 1876. Today, the farm is under the stewardship of Jeffrey and Michelle Thompson.

The Concordia Hills Barn is an L-shaped English-style bank barn with a gable roof. Its larger portion has three bays; its smaller portion has two bays. Built in 1884, the barn immediately captures your attention with the weathered patina of its original exterior sheathing and its dressed field stone foundation. Inside, you are struck by its hand-hewn timber framing throughout, its 3-bay granary, and roof rafters of small diameter logs.

Barn rehabilitation efforts over the years included replacing the original wood shingles with galvanized steel, replacing doors throughout as deterioration claimed them, and pretty extensive repair of the fieldstone foundation. The entire area around the barn is clean and neatly landscaped.

The barn has been part of the family for nearly its entire 140-year history. The Thompsons have owned the farm since 2015, and they are currently working to use the barn for “agri-tainment” purposes—opening at times for visitors during fall apple cider season and the spring maple syrup season. It also is used to house the hay taken off the farm.

The Thompsons are proud of the family and community history their barn represents. They wish it to remain a focal point for their family—both this generation and the next.

This is a fine example of a well-maintained barn, and credit must be given to the two generations of Eisenmanns who have owned the farmstead and its barn for the past 72 years. The family’s early use of the barn included a teacher milking cows while still teaching school, later switching to beef cattle and then to raising hogs. Current generation owners, Tom and Kathy Eisenmann, have lovingly maintained the barn over the years since it stopped housing animals and started housing equipment and becoming a place for get-togethers and family reunions.

This unique barn with its arched, curved rafter roof sporting two dormers is in a picturesque setting with several outbuildings including a horse barn, a granary, and a tool shed that have been preserved and restored as needed. With its 150-year-old farm house included, the property is a complete farmstead.

The original barn consists of five bays. The interior is made up of hand-hewn beams with mortise and tenon joinery. (Side note: An 1874 County Historical Atlas has a pencil sketch of the barn which at the time sported a simple gable roof. That early roof was removed and replaced by the unique rounded roof we see today.) Lending an additional allure to the barn is its asphalt shingle roof covering. A major change to the original barn occurred 60 years ago when a lean-to addition was attached to the back side. Visible from the sides and rear, the huge shed addition leaves the front view of the barn unobstructed.

Tom and Kathy Eisenmann are justly proud of their farm and homestead. Whether hosting family reunions, housing tractors and lawnmowers, working with Tom’s tools or having a place for grandchildren to play in the well-landscaped yard, the barn and surrounding farmstead is a great testament to barn preservation and celebrating our agricultural past. 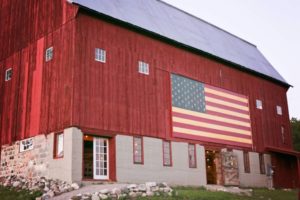 You can’t help but love stories that begin with such phrases as “The barn was in rough shape,” or it was a “lost cause,” but continues with other phrases such as “a diamond in the rough,” a “man who dreams big,” and “he sees something that most people would consider a lost cause and sees the opportunity in it.” Such is the story of the “Yellow Horse” Barn and the man behind its restoration, Perry Neuman, the father of our barn’s current owners, Tonya and Gus Boening.

The barn has a gambrel-roof 70 x 45 ft. split fieldstone, with hand-hewn beams and exterior vertical wood planks, mostly original. Its date of origin is unknown, but in 2015, when Perry Neuman purchased it, it suffered from chronic neglect. Though Perry was thought of by folks who saw the barn as perhaps a “little crazy,” he “had a light in his eye” when he spoke of the barn. He had a vision for it.

The “rehab of this barn was truly a task,” says daughter Tonya. In addition to substantial cleaning, patching, and repairing, perhaps the greatest effort and the greatest story involves the replacement of the basement beams needed to shore up and level the upper floor. In order to keep with the original aesthetic, the family made new beams—cutting poplar trees from the property, hand-hewing the beams with a broad axe, dragging the beams into the lower barn and putting them into place—all without the use of heavy equipment.

Most of the rest of the work needed to restore this gem was done through what Tonya calls “sweat equity.” Cutting in windows, moving the staircase, setting a new floor with rough-sawn planks, spending a weekend painting the exterior with a sprayer and a lift truck, and the crowning touch, putting the giant American flag on the exterior wall— all were done directly by the family.

After countless hours and weekends rehabbing the barn, Tonya and Gus were married there in 2018. Future plans are to use the barn for ag once again—raising cattle and having horses. For now, it is used for special events and storage.

Tonya says, “I know it’s just an old barn, but to me this barn means a lot more. I cherish the memories I made with my dad and husband.” And as for the name of the farm—Yellow Horse….well, she says you’ll have to ask her dad for that story. 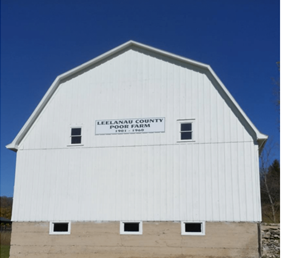 As with many county governments at the turn of the century, Leelanau County established a farm in 1901 to house residents who could not care for themselves and to provide them the opportunity to engage in meaningful work—both agricultural and domestic. These farms became known as “poor farms” in reference to the social status of their residents. The Leelanau County “Poor Farm” operated for more than 60 years—ending during the mid-60s.

The “Poor Farm” Barn, which is now the sole-survivor of the 120-acre farm and its several buildings, was built in 1911. Its survival, however, was never assured, and after 60 years of neglect following the closing of the farm, the county published a call in 2017 for bids to demolish and remove the barn. That move by the county also stimulated a move by interested residents to object to the proposed course of action and instead to call for efforts to repair and find uses for this barn. Eventually, a nonprofit community and educational organization, The Leelanau County Historic Preservation Society, was formed and after substantial negotiations, it was granted a 25-year lease to save the barn and to provide for its future use.

Designed by an architect, the sturdily-built barn used “new” construction technology for its time, featuring a poured concrete foundation, plank framing (as opposed to traditional timber framing), a gambrel roof, and a Shawver-type truss system. The original siding is ten-inch-wide hemlock and pine boards and two-inch wide batten. It was originally painted red, but at a later unknown date the barn was painted white—the color the newly-restored barn now sports.

Today, the Poor Farm Barn stands ready to fulfill its new role as a symbol of both our culture’s social history and the area’s important agricultural heritage. It sits as a lone sentinel to recall how the community responded in times of dire need. The Myles Kimmerly Recreation Park in which the barn sits draws visitors during the season for educational and civic events. It once again has become an asset to Leelanau County. 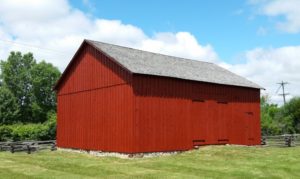 The first American settlers of Salem Township, near Ann Arbor in Washtenaw County, were the Dickersons—John, Joseph, and Amy. The year was 1825 (13 years before statehood for the Michigan Territory). Though the very first buildings were rudimentary log structures, in 1830 John Dickerson constructed the area’s first frame barn to store his equipment and hay. The story of that barn, its history, and its survival to today, is an inspiration to its community and all who value preserving our agricultural heritage.

The owners’ mission is to “preserve, archive, and inform others on the history of Salem Township” and to “Preserve the Past for the Future.” The Dickerson Barn is the oldest surviving barn in Washtenaw County (well documented to be 190-plus years old). As with all old barns, it went through challenging and changing times. Over the years, the barn was covered with metal and converted to office and storage space.

In 1999, the Township approved a permit to level the barn, which was said to no longer be useful and was in the way of expanding development. Thankfully, the owner was willing to work with a local non-profit, the Salem Area Historical Society (SAHS) to save the barn. Volunteers painstakingly dismantled the barn and stored it safely, while a six-year effort to secure funds for its relocation and re-assembly was undertaken. Beginning in 2007, the barn was reassembled on the site of the non-profit Society’s Old Stone School property in Salem.

The 32 x 42 foot-barn has a timber frame truss beam design, with mortise and tenon joinery. There are double swing doors in both the front and back walls, which originally allowed for horse drawn hay wagons to drive entirely through the barn. The original beam framing is now covered with 12-inch White Pine, the roof has Red Cedar shingles, and local ash trees were cut and used for flooring in the loft.

A heroic effort in dismantling, storing and reassembly, the barn now is used in interpreting other farms’ stories. The Salem Area Historic Society and its president Terry Cwik are justly proud of their success in saving and restoring this historic building.

These six “runner-up” barns in this year’s competition are deserving of recognition for their unique characteristics and history:

The preservation stories of these designated “Great Michigan Barns” will be featured in future issues of the MBPN Newsletter. See a picture of each barn on the Certificate of Appreciation awarded to each owner.