Barn of the Year for Continuing Agricultural Use – Family

With 150 years of continuous land ownership, the Brandt family celebrated the farm’s sesquicentennial in 2019. Current owners Rebecca and Jennifer Brandt are the great-great-great granddaughters of Henry W. Brandt, a German immigrant and early pioneer in Portsmouth Township (Bay City), who bought the land in 1869.

Rebecca and Jennifer Brandt accept the award for the barn at their family’s sesquicentennial farm.

The award-winning barn was built in 1929 by their great-grandfather William F. Brandt and his sons to support an expanding dairy operation. It’s actually two separate barns side by side that were joined together with a common roof. One half is made of new material and the other half is fashioned from an older adjacent barn with hand-hewn beams, deconstructed and reconstructed to create this magnificent 130-foot-long building. 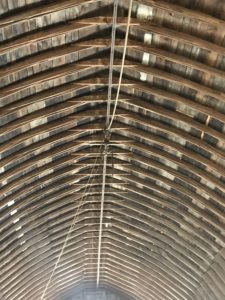 Since its construction, the barn has been continuously used for agricultural operations – transitioning from dairy to cash crops — wheat, corn, soybean, navy bean and sugar beets.

Much of the barn was adapted in the 1980s to accommodate larger, modernized farm equipment, including removing the stanchions and portions of the loft.  Although there are now three separate mows, the original hay trolley and track, spanning from one end of the barn to the other, is still in place.

Additionally, steel siding was added to protect the wood exterior. Recent renovations have included a complete roof replacement, a compacted stonecrete update for the floor and replacement of the upper barn windows with vinyl windows to match the original design.

“We are fortunate to have had generations of family and friends to share our barn with and by preserving it, we hope to continue our connection far into the future,” says Rebecca.

The entire Brandt Family turned out for the award presentation at the 2020 MBPN Annual Conference at Kellogg Center in East Lansing. They are joined by Keith Anderson, Barn of the Year awards chair (far left), and Tom Irrer, MBPN president (far right).