This year’s barn tour took us to the “sunrise side” of Michigan, also known as the “Other Up North.” The all-day barn and fall color tour by bus on Oct. 15, 2022  featured seven barns in three counties bordering Lake Huron — Alcona, Alpena and Presque Isle. 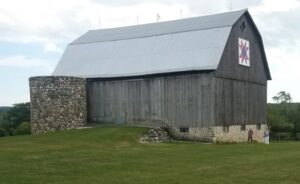 Leo and Sharon Somers’ centennial farmstead is now in the fourth generation of Somers family. You can tell the family has been here a long time as it is on Somers Road!

The property is exceptionally well maintained, and the buildings have extensive use of fieldstones in their construction. The 1914 gambrel-roofed barn has a fieldstone foundation with an attached fieldstone silo built in 1939. The timber-framed barn has an unusually strong bracing system.

In years past it has suffered from the ramp-side basement wall bowing that caused the opposite wall to lean. This typical ramped basement barn issue is caused by pressure from the ramp. The Somers have devised and implemented an effective method to restrain the foundation from moving any further.

This Michigan Centennial Farm is a showplace on the Alcona County Quilt Barn Trail. 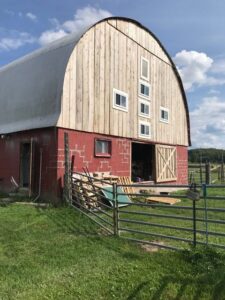 In 2021 Barbara Halazon and Marge Cappone bought this farm with the barn and the house in poor condition. They are determined to turn the farmstead around to raise and show their Nubian goats and Highland cattle.

The farm has a large round-roof barn with bent or “sprung” rafters setting upon an eight-foot concrete block foundation. As with many curved rafter barns, some of the laminated and nailed rafters had failed leaving the roof with sagging areas. The sagging eventually allowed water to enter and weaken the roof framing and rot the loft flooring.

Barbara and Marge hired barn contractor Roger Bateson of RJ’s Complete Barns Service in Prescott to devise a repair plan. Where nails in the rafters had allowed the laminations to separate, Roger pulled them back together with structural screws and devised a method to strengthen and stabilize the roof. 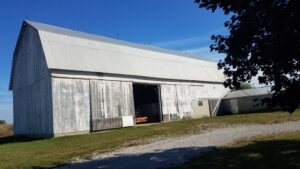 The Coffman Barn has an exceptionally large T-shape gambrel roof on grade (also called a “ground barn”). It has an original corrugated metal roof with lightning rods. It seems that this was originally designed as a “mid-century modern” dairy barn with huge hay storage capacity, a well-designed stanchion milking area and large attached concrete block milk house.

There are several unusual and confusing construction features within this barn. Guesses are that this is a very late dairy barn built in the 1930s or 1940s. It has pole rafters and a hay track in both the main and ell parts of the barn. It has a very rare “wind” bracing system in one part of the barn.

Local rumors say that Michigan State University had something to so with the design and building of this barn. Support posts in the loft in one part of the barn have two-inch bored holes that may be called “raising holes.” 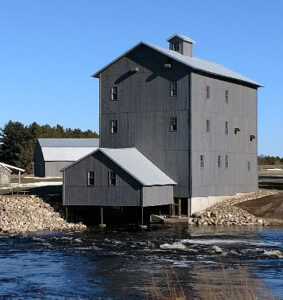 A historic grist mill and two barns of interest are among the buildings on the property of Hemlock Hills at Mill Pond event venue.

Around 1870 Michael Elowsky and John Miller developed the mill site on the North Branch of the Thunder Bay River. It was originally water wheel-driven but the partners soon invested in two Leffel Turbines which dramatically improved efficiency.

Michael Elowsky’s son Emil met a young Thomas Edison, and together they created a water-powered generator and full electric lighting for the mill. The Elowsky Grist Mill had electric lighting for extending business hours – 20 years before the nearby cities were able to add their own electricity. Elowsky operated the mill into the 1950s, and then part-time until 1963.

The west barn has been adapted as a pavilion and holds an exhibit about the preservation of the Mill. The east barn, adapted as a wedding and event space, is a rare “heavy composite” framed barn built using 2” planks nailed together to resemble a timber frame.

The Bruski farmstead will reach Sesquicentennial status in 2025, recognizing 150 years of ownership by the same family. The farm was originally two hundred acres but is now divided up between several siblings. This area of northeast Michigan settled by Poles and Germans in the 1870s, remains known for its potato harvest.

Most recently Jim’s barn was used for dairy, milking 28 to 30 cows with Surge milkers. Production was upgraded to Grade A Milk in the 1950s.

The structure is an on-grade (ground) T-shaped barn, with a gambrel roof and timber framing. It appears that the ell was built with the original barn. The post and beams are slightly larger than normal, with canted purlin posts braced to the outside. 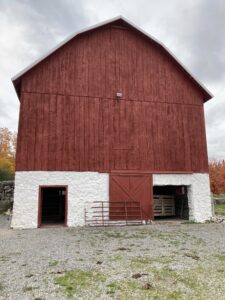 This barn was honored as “Barn of the Year” by the Michigan Barn Preservation Network (MBPN) in 2016. Owner Sharon Wyman raises national championship Hereford cattle on her Pleasant View Ranch. Over the years, the barn has been home to countless prize-winning Herefords that were exhibited across the country, bringing back awards that now hang across its weathered beams.

Maintaining the originality of the barn has always been important to the Wyman family. When Sharon and her late husband purchased the property in 1983, they knew it would require some extra care along the way, but they also knew it was worth it!

“This old northern Michigan gem has been serving its original purpose of housing cattle for over 100 years,” Sharon says. “We have done our best to preserve this part of Michigan’s heritage.”

Many repairs and improvements have been made such as all new windows with wire cages inside and out to prevent curious horses and cattle from poking through the glass, and new wiring and electrical service for safety purposes. 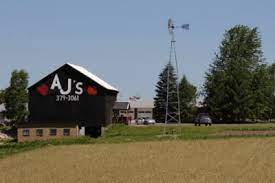 AJ’s Berry Farm is a U-Pick farm, where customers get an up-close, personal taste of a working farm. AJ’s has been in operation since 1997 when at 14, he discovered a passion for farming. AJ started out with a quarter acre of strawberries and a lot of faith. Since then, the farm has expanded to include raspberries, saskatoons, pumpkins, squash, a variety of seasonal fruits and vegetables, and an onsite arm market.

In 2006, AJ and Amy were married and in 2008 they began a family with twin girls. Now they have a total of five sweet girls, who can often be found helping out in the fields and the store!​

The barn at AJ’s is at the heart of the farm and houses the farm market and store. It is a good example of a very appropriate adaptive use for barns. It is a three-bay gambrel roof timber frame basement barn.

-Submit nomination for Barn of the Year.